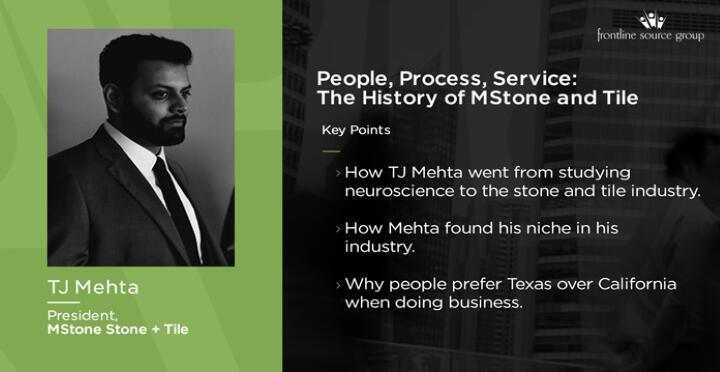 TJ Mehta started MStone Stone and Tile Company when he was only 22 years old, and now the company owns some of the largest quarries in India and sources from China and Europe, as well. Mehta joins host Tyler Kern and guests Bill Kasko and April Milton of Frontline Source Group to talk about the history of MStone Stone and Tile and how he started a successful business in his 20s.

Mehta was only 22 years old and going to medical school before he decided to go another route, but this was not without scrutiny. Mehta said, “when I declared to my family that I was not going to get into medicine, they just went into scramble mode.”  His father was a doctor, and he had planned to follow in his father’s footsteps until he realized he didn't want to go through school and residency.  After starting his business, Mehta quickly learned as he went. His first shipment of materials had him in a scramble and, when he asked advice from his family, they said, “We have no clue what you are doing. You started a business, figure it out.” He did not even have a place to put his materials or an office at the time.

Eventually, Mehta hit his stride. His company now is very successful, and he has figured out where he fits in the industry.  "The reason why someone like me has an opportunity in this industry is because people like to avoid dealing with people directly overseas," he said.

Listen to the full interview for the rest of the story.