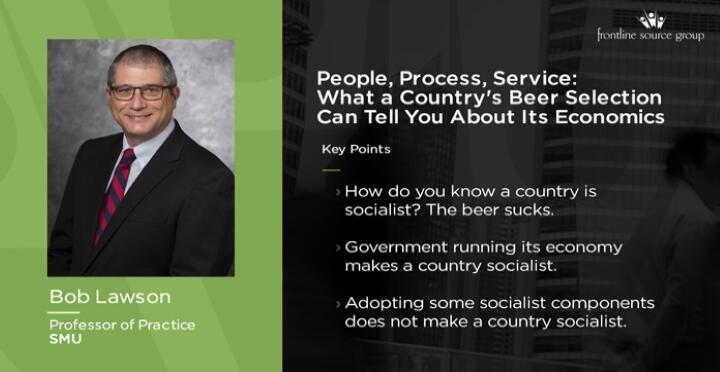 Lawson and his fellow economist, Benjamin Powell, set out on a world tour of socialist countries to find out what works and what doesn’t about them. The results? Lawson appreciates the economic opportunities of America, and he won’t be teaching in Venezuela anytime soon. But the most important discovery for Lawson was, the beers in these socialist countries are terrible—and such few options.

To spice up the pot for this lively conversation, Kern, Kasko, and Lawson drank their way through the episode, sampling a dozen beers, while they each guessed what country from which each beer came. Kern’s strategy: guess Heineken every time, and eventually, he’d be right.

So, what exactly makes a country Socialist? Lawson dispelled some myths for Kasko and Kern. Sweden and Canada may have socialized medicine, but they still have a free market economy. Even China enjoys the benefits of the free market, albeit with government control. Lawson described the process of writing Socialism Sucks, and he shared his stories of visits to socialist countries such as Cuba and Venezuela, where government economic control results in limited choice and freedoms. And one constant remained above all—the beer in the socialist countries Lawson visited, sucked.