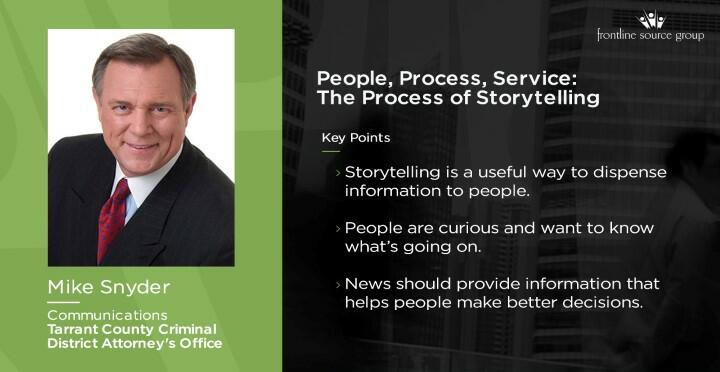 It was story time on this week’s episode of People, Process, Service, as a true professional in the field of broadcast journalism came into the MarketScale studio to chat with hosts Bill Kasko, President and CEO of Frontline Source Group, and Tyler Kern, MarketScale publisher. Mike Snyder is head of communications at the Tarrant County Criminal District Attorney’s Office. Still, residents of Dallas Fort Worth, Texas, might know him better from his three decades as a News Anchor and Correspondent at NBC-5 (KXAS).

Snyder shared his career filled with stories of people and the changing process of delivering news to the community. Snyder viewed his role as a reporter as providing a service to the community, and he realized early on that storytelling was the key to success in reaching people and delivering relevant information. And in that effort, Kasko and Kern were not to be left disappointed.

From his early start as a disc jockey to his eventual role as a news reporter, Snyder spent the podcast telling stories of his career in news, which took him to Russia during the collapse of the Soviet Union, and his long-term friendship with Jerry Lewis.

“It’s the people I’ve met in life along the way who have helped me make the transition from amateur news reporter to a professional storyteller,” Snyder said.

What about the state of news today? Snyder provided a lot of thoughts and insight.

“What passes for news today is a convenience in between commercials,” Snyder said. “We need to get back to real reporting (and) dig into things that are important and matter to people.”